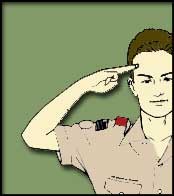 The Scout salute shows respect. Use it to salute the flag of the United States of America. You may also salute a Scout leader or another Scout.

Give the Scout salute by forming the Scout sign with your right hand and then bringing that hand upward until your forefinger touches the brim of your hat or the arch of your right eyebrow. The palm of your hand should not show.

Our Scout salute and handshake are ancient signs of bravery and respect. During the colonial period of our country, many men carried weapons for protection. Sometimes when they met one another, there was an uneasy moment as each man watched the others right hand. If it went to his sword or his gun, there might be a fight. but if it went to his hat, it was a salute of friendship and respect.