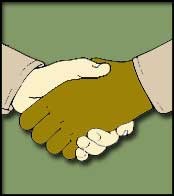 Our Scout salute and handshake are ancient signs of bravery and respect. During the colonial period of our country, many men carried weapons for protection.

Sometimes when they met one another, there was an uneasy moment as each man watched the others right hand. If it went to his sword or his gun, there might be a fight. but if it went to his hat, it was a salute of friendship and respect.

The left handshake comes to us from the Ashanti warriors whom Lord Baden-Powell, the founder of Scouting, knew almost 100 years ago in West Africa. He saluted them with his right hand, but the Ashanti chiefs offered their left hands and said, “In our land only the bravest of the brave shake hands with the left hand, because to do so we must drop our shields and our protection.”

The Ashantis knew of Baden-Powell’s bravery because they had fought against him and with him, and they were proud to offer the left hand of bravery.

When you use the Scout salute and handshake, remember that they are signs of respect and courage.

The left hand is also closer to the heart…